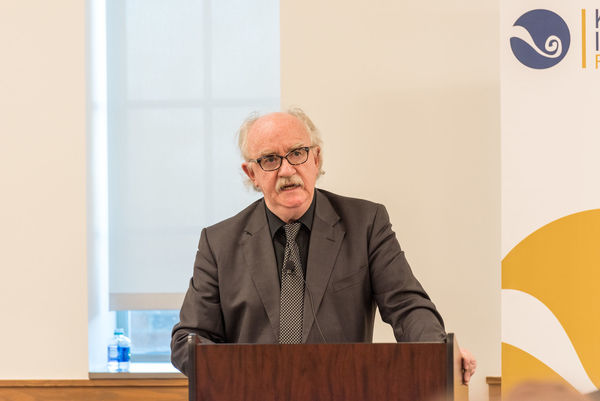 Concurrent faculty member Declan Kiberd, the Donald and Marilyn Keough Professor of Irish Studies and professor of English and Irish Language and Literature, has been elected to the American Academy of Arts and Sciences (AAAS).

Kiberd, a Dublin native who counted the novelist John McGahern among his earliest schoolteachers, studied at Trinity College Dublin before earning a doctoral degree at Oxford, under the direction of Richard Ellmann, the biographer of James Joyce, William Butler Yeats and Oscar Wilde. He taught at the University of Kent, Trinity College, and University College Dublin.

A faculty fellow in the Keough-Naughton Institute for Irish Studies who came to Notre Dame in 2011, Kiberd is an Irish language speaker and a scholar of Celtic culture and Irish literature and history. He has lectured in some 30 countries worldwide and contributes essays and reviews to the Irish Times, the Times Literary Supplement, the London Review of Books and The New York Times.

“It is a wonderful thing to have one’s work generously recognized by colleagues,” Kiberd said, “but I am sure that the academy is also marking the contribution of so many other Irish studies scholars at Notre Dame. The whole thing has lifted my heart.”

His study of Irish literature, Inventing Ireland, was praised by the late Edward Said as “a highly readable, joyfully contentious book.” Kiberd’s most recent book, After Ireland: Writing the Nation from Beckett to the Present was published by Harvard University Press in 2018 and has just been released in paperback. He is currently finishing a book, Beckett Unknown: Mysticism without God, and a short book about cricket, England and Eternity.

Original article published by the College of Arts and Letters: Two Notre Dame Faculty Members Elected to the Academy of Arts and Sciences, April 18, 2019.