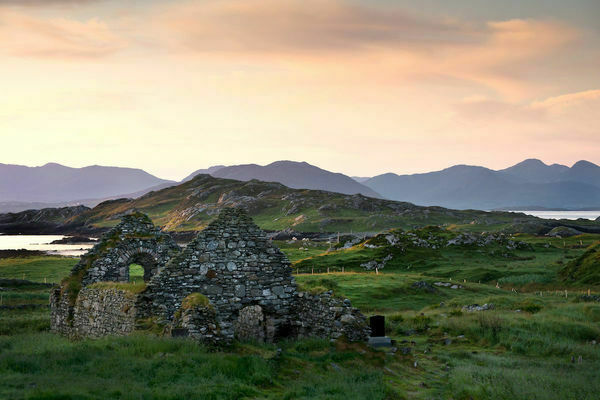 Irish is a Celtic language (as English is a Germanic language, French a Romance language, and so on).

This means that it is a member of the Celtic family of languages. Its “sister” languages are Scottish, Gaelic, and Manx (Isle of Man); its more distant “cousins” are Welsh, Breton, and Cornish.

The word “Gaelic” in English derives from Gaeilge which is the word in Irish for the language itself. However, when English is being used, the Irish language is conventionally referred to as “Irish,” not “Gaelic.”

Irish has the earliest attested vernacular European literature outside the classical world of Greece and Rome; there is evidence for a literary tradition in Irish as early as the sixth century A.D. and evidence for literacy predates that.

The medieval literary tradition has excited the imaginations of scholars all over the world, incorporating as it does some of the most extensive saga literature to be found anywhere.

These sagas offer not just the delights of dramatic storytelling, they also shed considerable light on the social, cultural and political configurations of Early Ireland, in particular the engagement of Christianity with the pre- Christian culture that preceded it, and of a literate culture with its older oral inheritance.

Our understanding of the cultural richness of medieval Ireland is also immeasurably enhanced by an abundance of law texts, wisdom texts, annals, genealogies, poetry, saints’ lives and various other devotional texts.

Despite its position on the continent’s northwestern periphery, Ireland has always had a lively engagement with the European mainland.

From the seventh century, Irish monks and scholars were to be found at the Carolingian court, while the oldest Irish manuscripts contemporary with the language in which they were written are to be found in Cambrai, France, Würzburg, Germany (both eighth century) and Milan, Italy (early ninth century).

Characteristically, these are Irish glosses to Latin texts of a scriptural or more generally devotional nature.

The later medieval period also sees significant translations, or rather adaptations, into Irish of classical Latin texts like the Aeneid, while the formal praise poetry which flourished in the period roughly 1200-1650 reveals the influence of compositional techniques of the European Poetria Nova (New Poetry) of the twelfth and thirteenth centuries.

By this time, Ireland had experienced invasion and settlement on the part of the Vikings (from Norway and Denmark in the ninth and tenth centuries) as well as the Anglo-Normans (from Normandy in France via England and Wales in the twelfth and thirteenth centuries).

Over time, both these groups were largely assimilated to the Irish language and its culture, leaving an imprint on matters of vocabulary and literature. More problematic for the language in the long term was the second English conquest of Ireland instigated by the Tudor monarchy in the sixteenth century.

Unlike previous attempts at conquest in Ireland, this one proved to be much more systematic and by 1800 Ireland was politically unified with Britain. Increasingly during the seventeenth and eighteenth centuries, Irish became more peripheral to the centers of economic and political power.

Although it remained the first language of most of the population of Ireland, bilingualism was greatly on the increase. In the nineteenth century, the cause of the language was not helped by famine and emigration and by the late in the century Ireland had become largely English-speaking, especially in urban areas.

In spite of this, it might be said that the period from the seventeenth to the early nineteenth centuries is one of the most interesting and productive in Irish literature.

A notable and enduring feature of this literary tradition is its transmission in manuscript rather than in printed form to an extent unusual for a major European language.

From the edge of the precipice in the nineteenth century, Irish has rebounded today to become an official language of the Republic of Ireland and of the European Union, as well as a recognized minority language in Northern Ireland.

It boasts a lively contemporary literature in both poetry and prose, is also a rich repository for students of folklore, music and popular culture, as well as maintaining a vibrant presence on the Web.