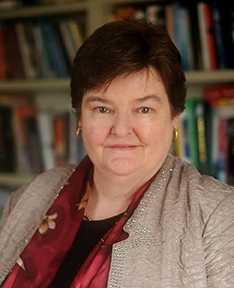 Fellow of the Keough-Naughton Institute for Irish Studies

Professor Nic Dhiarmada first came to Notre Dame as the Naughton Distinguished Visiting Professor in Spring semester, 2006, where she taught undergraduate and graduate students and arranged the visit to campus of the great contemporary Irish poet, Nuala Ní Dhomhnaill.

During the same semester, in 2006, Professor Nic Dhiarmada learned that her own critical book on Nuala Ní Dhomhnaill, Teacs Baineann, Teacs Mna had won the prestigious Merriman Prize for Irish Language Academic Book of the Year; in addition to authoring numerous articles, she is also an editor of The Field Day Anthology, co-editor With Máire Ní Annracháin) of Téacs agus Comhthéacs: Gnéithe de Chritic na Gaeilge.  After Professor Nic Dhiarmada left the visiting professorship at Notre Dame, she returned to Ireland, where she continued her academic writing and also her on-going work in scriptwriting, film and television. The author of over 35 screen plays and 10 documentaries, Bríona went on to win the 2007 Television Programme of the Year at the Oireachtas na Gaeilge for Ar Lorg Shorcha. Her winning documentary, which Professor Nic Dhiarmada wrote and directed, tracks the little-known career of an early leader in the Irish language movement and sean-nós singer, Sorcha Ní Ghuairim, who died in obscurity in London. In the 2007-2008 school year, Professor Nic Dhiarmada returned to campus as the inaugural Senior Fulbright Fellow, sponsored by the United States Department of State, Bureau of Educational and Cultural Affairs and the Republic of Ireland through National Lottery funds and the Department of Community, Rural and Gaeltacht Affairs under Minister Éamon Ó Cuív. She returned to join the permanent faculty in the fall of 2008.

Professor Nic Dhiarmada is currently at work on a multipart documentary series on the Easter Rising of 1916, which will be broadcast on public television internationally.

Professor Nic Dhiarmada is happy to work with undergraduate and graduate students on Irish poetry, film, politics and a range of other topics.